My father has always been an avid hunter and marksman. He shared his love of the shooting sports with me. I enjoyed 3 position and 4 position smallbore competition the best.

Tae Kwon Do (USTU) — Started in the big martial arts craze in the early 1980’s. Joined Dominick Silletti’s Tae Kwon Do in Grand Forks, ND. Earned my blackbelt under his instruction after 3 1/2 years and four school locations. Continued under Mr. Don Gross until moving to Houston. Unable to find a good (affordable) school in the Houston area, started the first of many Rogue Blackbelt Schools™ where I would train with someone I met on an unofficial basis.  Now training with a very traditional TKD school.

Aikido (ASU/CAA) — The most joyful experiences you can have in the martial arts. I started my official training in Madison, WI under John Stone Sensei. I had a long absence in the military, but found Doug Hanson Sensei in Ponca City, OK when I returned to the States.  I trained with Kevin Murphy and Doug Clubine at St. John’s University in Annapolis.  I found Quemazon Aikido in Los Alamos and am studying under August Swanson Sensei and Skyler Swanson. 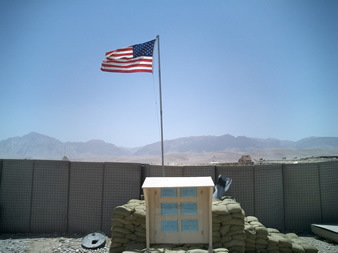 Enlisted — Basic Training, FT Jackson, SC. I went in with a Masters degree in Applied Physics because I wanted to jump out of airplanes. (The Air Force recruiters never called me back.)

OCS — Benning School for Boys, FT Benning, GA. One of the more difficult challenges in my life, and not an experience I would willingly repeat. Of course, it’s not as hard or brutal as it used to be (according to all the stories from officers who went through during the bad old days.)

Germany — I was with the 141st Signal Battalion of the 1st Armored Division when they were still in the great little town of Bad Kreuznach. The division headquarters moved after I left active duty to the Wiesbaden base and now is out of Ft. Bliss, TX.

Balkans — I spent five months in 1996 in Slavonski Brod, Croatia with C Company 141 SIG with IFOR. A few months after returning, 1st AD picked up the next SFOR mission (before they had to start numbering them.) I returned to Eagle Base in Tuzla, Bosnia again with C Company. I served with an excellent group of soldiers and one damn fine commander, then CPT Timothy P. Norton.

Oklahoma National Guard (2000-2002) — After returning to grad school, I decided that I had a whole closet full of BDUs that weren’t being used. So I looked into the OKARNG. The next thing I knew, I was the SIGO (Signal Officer) for the 179th Infantry Battalion of the 45th Separate Infantry Brigade (Enhanced). The culmination of my Guard service was a rotation at JRTC.

Afghanistan (2003-2004) — We went to train and mentor the fledgling Afghan National Army (ANA). I thought I had gotten out of the Guard to focus my efforts on getting my Ph.D. But I had an adventure instead.

Resigned Commission (2008-ish) — A painful difficult decision, but the only way to build a professional career with the operational tempo at the time.